I’ve used plenty of different social sharing plugins, and none of them got me what I wanted.

None of them, that is, until Social Rocket came on the scene and changed everything for me.

It’s new to the scene, but it has everything I want in a social sharing plugin, and nothing I don’t want.

Hopefully this review will help you make an informed decision of whether Social Rocket will work for you, too!

What is Social Rocket?

The rest of the links to Social Rocket in this post are also affiliate links, which means if you buy this plugin, they’ll send me a bit of money as a thank-you, with no additional cost to you. Thanks for your support!

Each had its pluses and minuses. Shareholic was great when I was starting out, Sumome was easy to install, and Social Warfare felt like a game changer when they came out with a tool that would share a different image for Pinterest verses all the other social media platforms.

And it was a game changer for a long time.

But it wasn’t stable.

The other sharing plugins I’d used in the past had their own downsides, but one thing they had that Social Warfare lacked was stability.

I found myself thinking about my social sharing plugin much more often than I wanted to. I really never want to think about any of the plugins on my website! I just want them to work, period.

A “behind the scenes” tour of Social Rocket 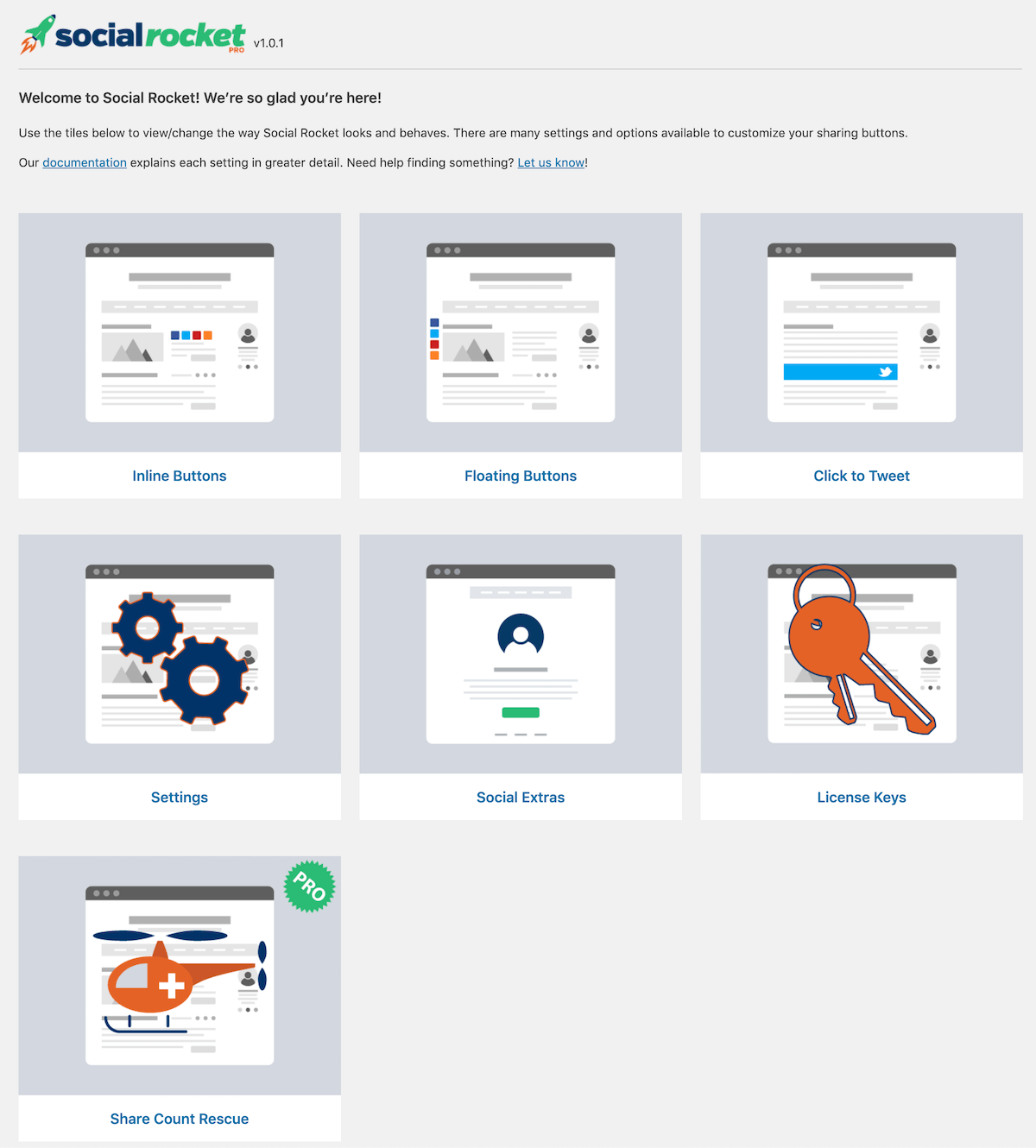 My favorite part of this is the preview window down at the bottom, which (naturally) changes when you edit things.

Note: I did not edit things (see above comment about not wanting to think about social sharing!) but I do appreciate that you can.

When you click the Activate Networks button, you have your choice of seven billion social networks, all of which are real, but many of which I have never heard of:

Far be it for me to neglect that one! Just because I haven’t shared a link on Facebook in six months doesn’t mean other people won’t want to.

This is also the place to configure exactly where, on your site, you want sharing buttons:

My advice here is to leave the default settings as they are, then when you’re on your site and you find random sharing buttons where you don’t want them, come back here and turn them off.

I went with 125% size and a rounded border of six pixels. It looks big now, but I like how it stands out.

Here’s what the options look like when you click Floating Buttons from the main Social Rocket page:

And the options are easy to adjust here, too.

This is what the floating buttons look like live on my site:

This is a very stupid screen shot. I’ll leave it here, but do yourself a favor and look slightly to the right. There they are!

They have a “Click to Tweet” option, which is probably a feature I should use given that I am well aware that people are willing to share your stuff as long as you make it easy for them.

Social Rocket is everything I’ve wanted in a social sharing plugin. It’s fast, lightweight, and has a different option for Pinterest images.

This is what I see in that section: 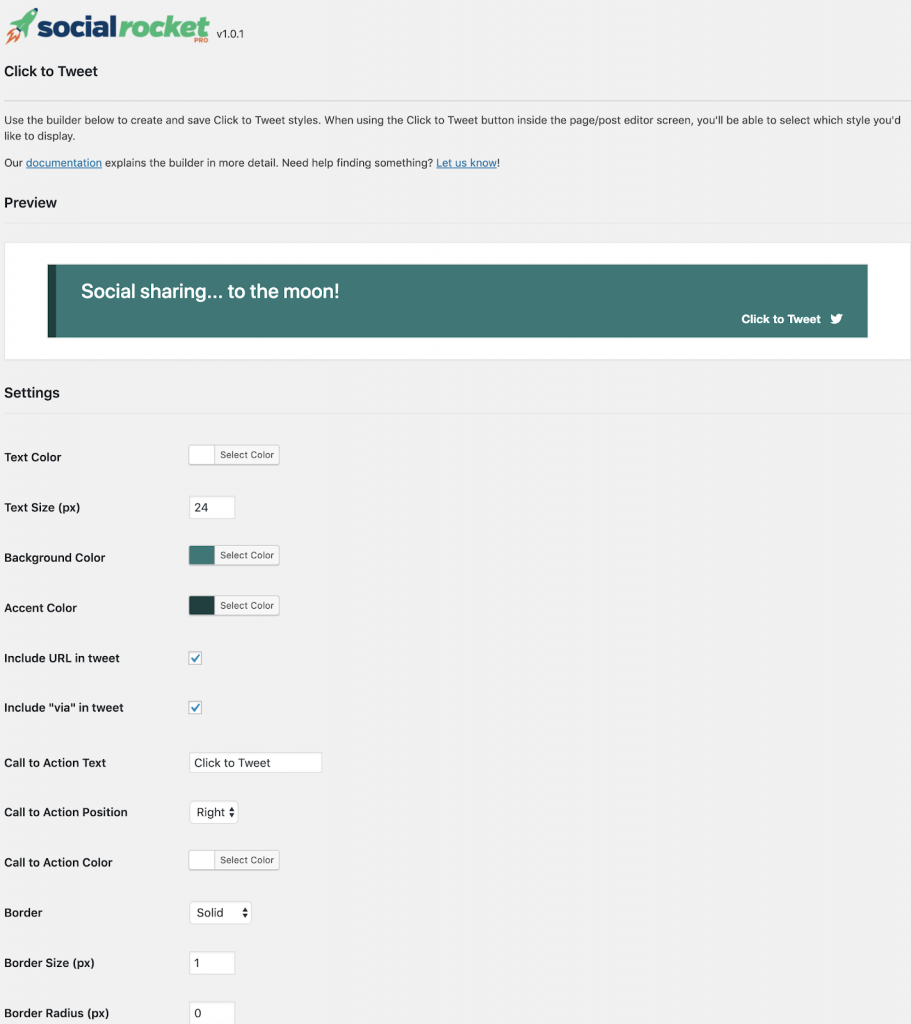 I didn’t change anything other than the colors, but now I’m motivated to add Click to Tweet options in all my posts moving forward! 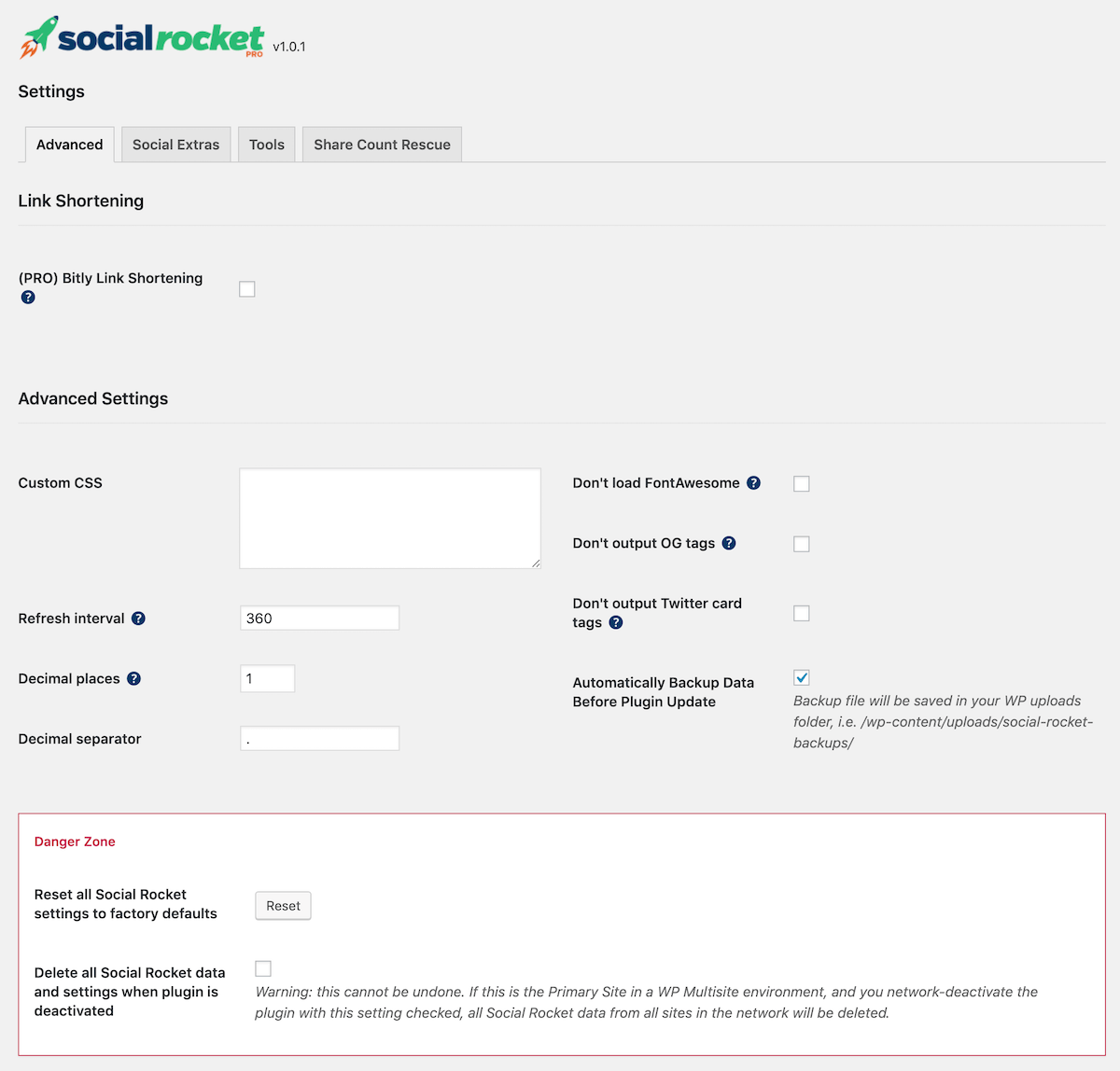 So little of this makes sense to me, but luckily they added little question marks you can click to understand a piece of this better.

I want FontAwesome, I want OG tags (which I know is something something Facebook something), and I want Twitter cards.

This section is for someone who has more plugins or hard-coded things than I do.

The Social Extras tab is for everyone. This is where you connect your social sharing buttons to your social accounts, which is necessary if you ever want to find out who’s tweeting about you or pinning your content. 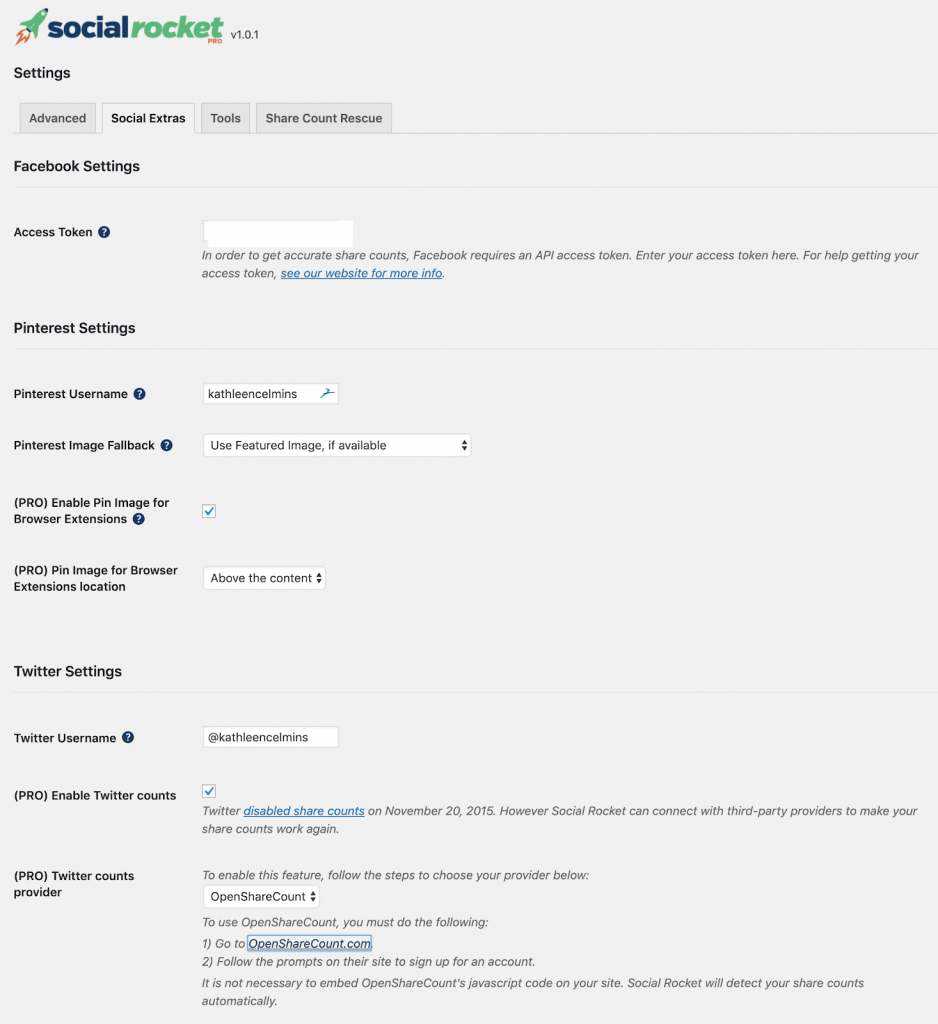 There’s a section where you can “get back” your Twitter share numbers. I use the quotation marks because my site is newer than that Twitter rule, but I do still want to have sharing. Following the prompts makes that simple, too. 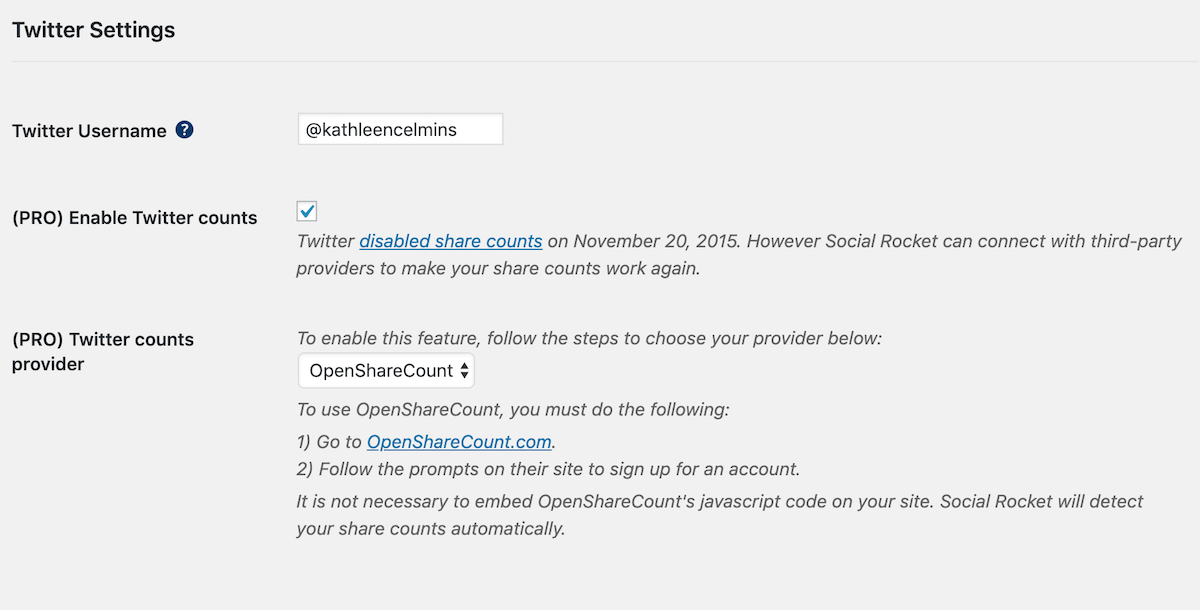 There’s a section for Yummly, which is for the pro version of the plugin. Without doing too much research into things I don’t use, I’ll say this: if you know what Yummly is or what it does, then you probably want the upgraded pro version of the plugin. And you’ll probably have a better understanding of what it means to “show Yummly only on certain post types” or certain categories or tags.

Update: Asked a friend about Yummly, who said it was for food blogging (and that makes me feel better about not knowing what it does!), which means you’d only want the Yummly share option on, say, recipe posts.

I love the tools section — this tab should be called “ways to make your life easier, by Social Rocket” but I’m guessing they didn’t have enough space on the tab.

Should you decide to purchase the PRO level of Social Rocket (which I did), this is where you’ll enter your license key.

That’s the code that they sent you via email: 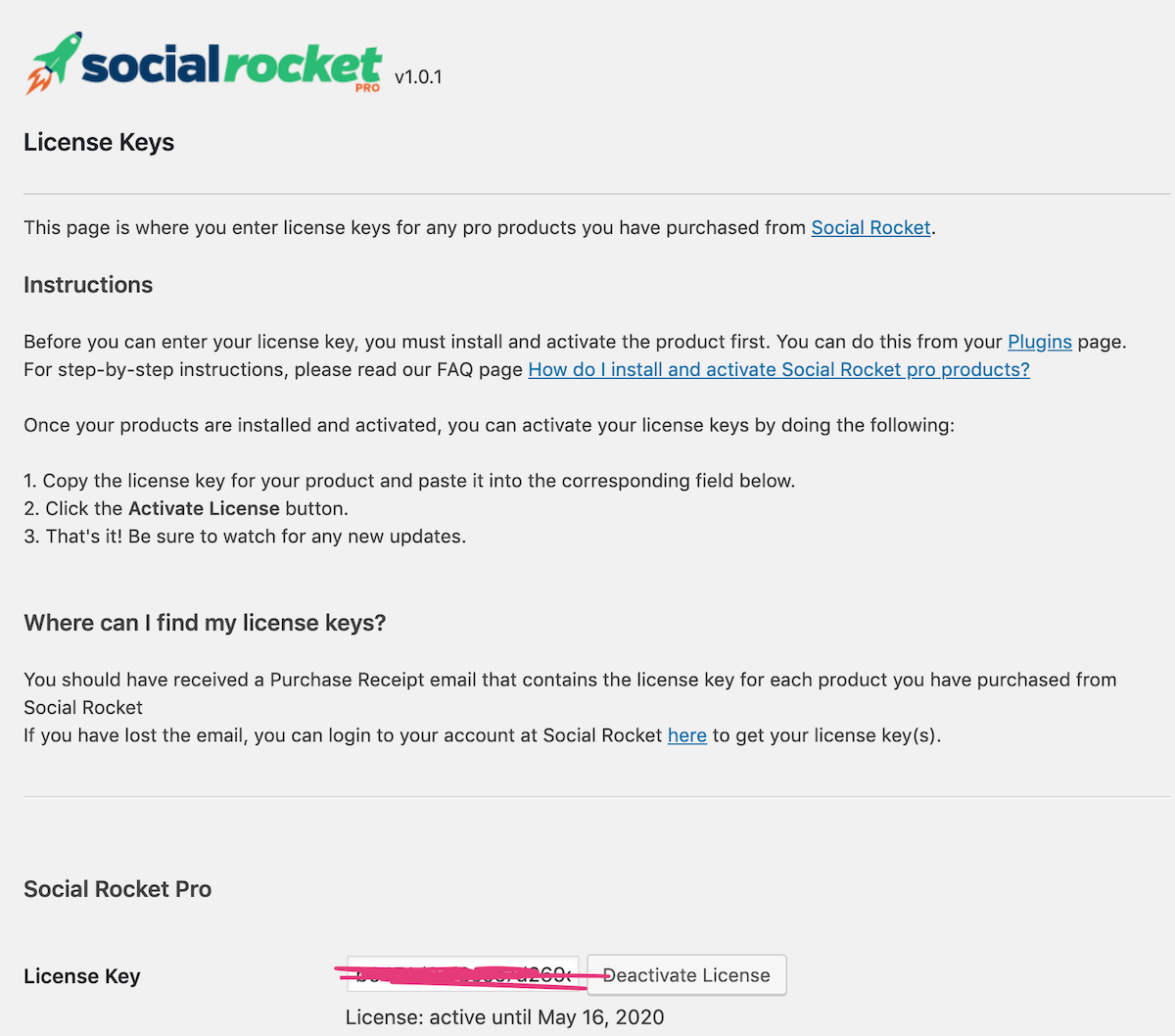 Are you one of those people who haven’t made the switch from http to https because you’re sad about losing your share counts? Or maybe you rearranged your permalink structure so it’s not date-specific. Maybe you took out (or put in) the www on your domain.

If you make these kinds of sweeping changes, you will need to buy the pro level so your share counts can stay.

Already use a different plugin and don’t want the hassle of switching? Get the migrator!

If you already use Social Warfare, Social Pug, or Mashshare, you might think, “great, Kathleen, this plugin sounds amazing, but what a hassle to switch from what I already use.”

I get it. I have spent hours (maybe even days) uploading custom images to Social Warfare and if I had to redo that I would want to poke a fork in my eye. In fact, I’d rather just deal with something unstable than re-upload all of the things.

Thank goodness the fine folks at Social Rocket thought of that and created a migration tool plugin that you install, run once, then remove from your website.

I did this when I redesigned Anne’s site (you can read about that redesign here) and it worked perfectly, which is important at all post counts but especially when you have something like 2000 posts.

If you’ve never used the other plugins, don’t get the migrator. But if you’ve used the paid version of Social Warfare (which is what Anne was using before switching), you need it. It’s $9, and worth it.

Get the Social Rocket Migrator >>

After you do all your migrating and setting up, you can (mostly) forget about Social Rocket. That is, until you write a post.

Here’s what the plugin looks like on individual posts:

If you want the default text to be something other than your post title, add that here.

The rest of the options should not be messed with (which is why they have default options!).

If it seems like there’s a bit of work involved in getting your social sharing set up correctly, that’s because there is. It’s worth putting in a bit more effort on your social options than you usually do, because that effort will pay off in spades. The easier you make it to share your post, the more people will share it. Not every post of yours will “go viral” or whatever, but if you put in the extra effort to fill out all five of those areas in every post you write going forward, they’ll get shared more.

Honestly, I’m surprised at how many words I was able to write for this review. It’s hard to write a lot about something that simply works the way you expect it to work, does what it says it’s going to do, doesn’t slow down your site, and helps you increase your traffic simply by existing.

I love Social Rocket, if that wasn’t already abundantly clear, and I think you will too.

It’s totally worth the $29 a year to get the pro version, but if you’re not accustomed to paying for plugins, they have a free version you can use.

Use my link to buy Social Rocket >>